Why is that so? When that Facebook page was created in 2009, I thought that Hetalia Day was just a one-time thing. Thus the “09” in the end.

After Hetalia Day 2009, it turned out that Hetalia Day will be held the next year, and the year after that, and so on. So I tried to change the name. But the page already had at least a thousand fans, and according to Facebook policy, changing the name isn’t possible anymore:

As for the category: there are more categories now than when the page was created. Currently, the page is categorized under Other > Community.
Do you think it should be changed or not? 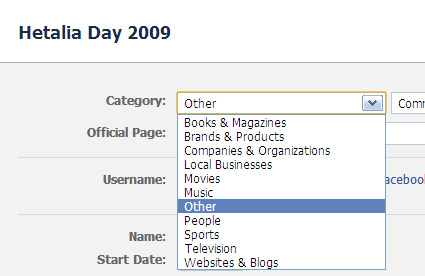 How many are doing it?

1) How did it go with the code of conduct last year? Too strict, too lax, or just right? Do you have any additions/suggestions?

2) What would you advice to a first-time organizer?